Cupcakes...what's all the fuss about?!!

I just don't get the whole cupcake thing, they're just tasty little cakes that have been completely ruined by too much sickly frosting.  Now don't get me wrong, they look cute and pretty and would be more appealling with just a little frosting and no 'toys' on the top, but you just can't beat a nice wholesome, rustic home baked cake such as lemon drizzle, banana bread, Dorset apple cake or a nice big muffin!

Having said all this, I do make the occasional batch of cupcakes and I even went on an Eric Lanlard Cupcake Masterclass in the summer, because they are what lots of people want to eat so I need to know how to make goods ones, but I have to confess, I enjoyed the afternoon tea at Cake Boy and watching Eric at work far more than moulding and painting brightly coloured decorations to put on top of said cupcakes, which were pre-made sadly.
I also learnt at the workshop that one of the forces behind the rise of the cupcake was down to the Magnolia Bakery being featured in 'Sex in the City', well it just shows how ill informed I am on such things, I had no idea! 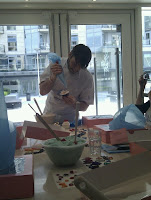 I visited the Magnolia Bakery way before it was featured on 'SITC' because my nephew had recommended it to me after he'd been there, and I must admit that even back then I didn't like the excess of frosting.  However I did buy 'The Magnolia Bakery Cookbook' earlier this year (before I'd had the 'SITC' revalation I might add) and baked some really scrummy peanut butter cookies from it which went down a storm at work!
So there you have it, my take on the cupcake which I know may seem a little odd to some, but it wouldn't do for us to all feel the same way about these things now would it?! 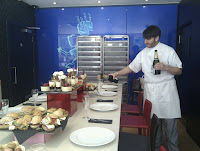