I tried to write a '2011 wind down' post before the year actually came to an end, and as is often the case with these things, I was really stuck for what to say and what to include - so instead, I'm making it a 'look back at 2011' post and hope you enjoy reading about some of the things I got up to last year.  Apart from being made redundant for the second time in as many years I did have some really good times.

As I said  in a previous post, I went on a Cake Boy Cupcake Masterclass, which was a good day all in all and I met some really nice people there.  I also went to the BBC Summer Good Food Show, which was really great too.  The best bit for me was watching and getting meet my favourite TV chef, Simon Rimmer, what a lovely man!  He is every bit as nice and friendly as he appears on Something for the Weekend.  One of my hopes for 2012 is that I finally get a chance to visit either Greens or Earle...or both! 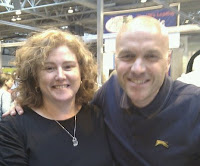 June saw our annual summer Solstice trip to the west country including a few days in Glastonbury (the town not the festival). 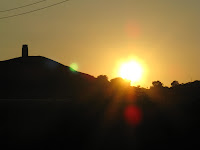 And apart from visiting the lovely Glastonbury White House, we stayed in a beautiful out of the way B&B in Barnstaple called The Devon Long House, it was idyllic.   Take a look, both B&Bs are well worth a visit.
http://www.thedevonlonghouse.co.uk/
http://www.theglastonburywhitehouse.com/

Also in the summer Andy and I followed our annual birthday tradition of taking afternoon tea somewhere in London. 2011 took us to The Goring, which was booked way before we knew about the 'Royal Connection', infact we had stayed there in 2009 and it was lovely!  The afternoon tea was really fun, we had jelly in a little bucket and an ice lolly on a mini deckchair, I'd definitely recommend a trip if you ever get the chance.  If anyone can recommend somewhere nice for afternoon tea in 2012, please feel free!
In August my best friend and I took ourselves off for a week of total chill out time in sunny Swanage, which as always, was just what the doctor ordered.   Although we didn't do too much sun bathing we went for some lovely long walks around the area including Durlston Country Park and Brownsea Island, I love the scenery in that part of the world, the sea views are stunning. 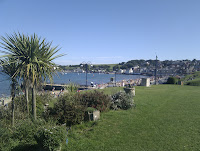 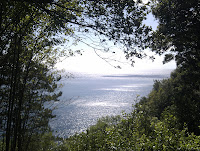 The autumn to me on a trip to the Netherlands for the Intenational Fundraising Congress, where I was a staff volunteer, and as always had a fab time even though it was very tiring.  I got ot catch up with some old friends and colleagues and made some lovely new friends too, I even got to dress up as a flapper for the Gala Night, what fun that was and everyone looked really fabulous!  It's the first time in ages I've stayed up and danced into the early hours of the morning...infact the last time was at the IFC back in 2009!!
In 2011 I finally persuaded Andy to come on the Swanage Steam Railway's Halloween Special and that was a real treat!   I even got him to wear a set of plastic devil horns...those who know him will tell you that is completely out of character for Andy!!
I had my annual visit the the BBC Winter Good food Show, which once again was a good but tiring day, I have to admit to peferring it to the Summer one though.
Then just before Christmas Andy and I took ourselves off on a Groupon deal to the Satis House Hotel in Yoxford, Suffolk for a few days, what a nice place.  I don't remember ever going to Suffolk before even though it's the county next to the one we live in...but I'm so glad I've been, it's lovely!  We went shopping in Woodbrige, which is really pretty and even joined the locals in a pub quiz at The Sibton White Horse.  We came half way down the leaderboard, but there were only two of us and most other teams had at least four or five members, so I think we did pretty well.  The hospitality was great and we may even stay there on our next visit to the area...take a look.
http://www.sibtonwhitehorseinn.co.uk/
http://www.satishouse.co.uk/
Christmas for us was a very quiet one, the first in our eleven years together that Andy and I have spent on our own.  We had a few family members over on Christmas Eve, but it was a tiny gathering in comparison to the one we ususally have.
Christmas Day and Boxing day were spent at home eating lovely food and watching some films I'd never thought Andy would ever watch, Charlie & the Chocolate Factory, Bedknobs and Broomsticks and of course one of my favourites Ratatouille, he did, however, draw the line at Seven Brides for Seven Brothers!!
We then went up and stayed in London the day after as I bought Andy tickets to see one of his favourite operas for Christmas, Die Meistersingers von Nurnberg at the Royal Opera House, which I have to admit was brilliant!  The seats were great and best of all Andy really had a lovely evening.
And finally our New Year's Eve was very quite also, just the two of us and a bottle of Shloer drunk out of champagne flutes that we'd got as wedding presents....perfect!
In 2012 I plan to start my 7th Star Secret Tea Room, so watch this space for details and dates....
Take care my friends, and a little belatedly Happy New Year!!
Mxx
Posted by 7th Star Baker at 17:07