Well, it's now been almost week since my MUA, that's the technical term for Manipulation Under Anaesthetic, which is the procedure I had to get my frozen shoulder moving again.  And if I'm honest, I'm not loving the fact that I have to put myself through terrible pain 3 times a day doing the flippin' exercises they gave me, which is the only way I can ensure my recovery from what has been a pain the arse shoulder condition I've had for the past 8 months!!

So, knowing that I would be off work for a while I got in a few movies to watch, however first I had to watch the final season of Gilmore Girls, which Andy (my husband) got me into at the end of last year...and as a result I am now bereft!!  I was so engrossed in the lives of Loralai, Rory and the residents of Stars Hollow that I cried almost all the way through the last three episodes, although I do wonder if it wasn't the effect of excessive doses of painkillers that caused my extreme emotional state!!  I think I may well give it a couple of months and watch the whole seven seasons again just to make sure. 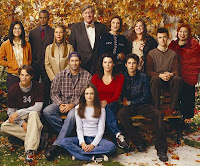 The first movie I watched was The Time Travellers Wife, which I have to say confused me as much as the book did, I really couldn't get my head round Henry's time travelling 'condition' - perhaps I'm trying too hard.
Then, because I'd heard such good reports about it, Andy and I tried to watch Bridesmaids (and also because Sookie from Gilmore Girls was in it) - what the heck was that all about?!!!  We gave up after about ten minutes, it just wasn't funny, infact it was pretty irritating!!

Having now been off work for a week my body clock is all up the wall and I'm wide awake at 11.30pm on a Sunday night, which means I may aswell stay up an watch the Oscars. It's been a good few years since the last time I stayed up for the Academy Awards, so let's see how long I last, I'll probably be snoring and dribbling on the arm of the sofa after about an hour...photos to follow....
Posted by 7th Star Baker at 15:31