Back to work, supper club and more

Well this year is reaily flying by! I think it's true that the older you get the faster the time goes.

It's now over a month since the MUA and the old shoulder is becoming more flexible each week thankfully. I've also been back at work for a couple of weeks now and 'hitting the ground running' was an understatement. Not only did I have to get used to commuting again, which is never a good experience, I was covering for the CEO's PA while she was off sunning herself in Egypt, I also met my new boss for the first time and then had to get things all set up and ready for his arrival. 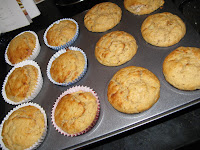 I have to admit that one of the things I did to get myself rehabilitated was baking...ya don't say!! Yep, I had a go at making some muffins as they are pretty simple and don't take too much mixing, often with muffins less mixing is better, so perfect therapy methinks!

Then, as is my way, I made a selection of baked goods to celebrate the arrival of the new boss, which if I do say so myself went down a treat with the very complimentary folks at work. It's a great feeling when I send out an email to say the tins are open and the goodies are there for the taking, and a stream of keen tasters coming rushing along the second floor to try what's on offer, then make very pleasing noises that say they are enjoying what they eating...some even took stuff home for loved ones to try! 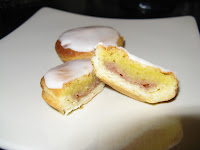 This week Andy and I attended our first underground supper club at Mustard Seed and had the most fabulous time!  It was an intimate affair with just eight of us, but we all got on so well and we got to know some really nice people of all ages and from different walks of life.  Katherine, one of our hosts, gave me some really good tips for when the 7th Star Secret Tea Room opens, which I really appreciated and I made some great contacts on both Facebook and Twitter.  For full details of Mustard Seed go to www.mustardseedfarm.co.uk

And fianlly...I am chuffed to bits that the very first 7th Star Secret Afternoon Tea will take place on Sunday 29th April, I'm also glad to say that it's fully booked.  Okay, so it's my mother-in-law and her friends but it's still going to be a full on proper event.  I'm already looking at dates for May and June, so watch this space for more details, alternatively let me know if you would like to go on my mailing list.